The University of Utah Men’s Lacrosse team beat Washington on Saturday at UCLA in the annual Pac-12 Shootout by the score of 18-10.

Midfielder Gus Colonna notched the first goal of the game to give the Utes an early lead after spinning off his man and finding space for a quick shot. Washington answered on its next position to tie the game at 1. After the pace of play slowed, the Huskies settled into an offensive set but defender Kendall Jackson was able to get his stick in a passing lane and pick off a pass. Midfielder Devin Keefe also caused a turnover that led to attackman Aaron Fjeldsted driving from X and finding attackman Luke Graney on the crease who scored the second goal for Utah. Minutes later, midfielder Jake Stout scored on his signature shot when he dodged down the alley and ripped the ball in the far low corner.

Washington took advantage of a Utah mistake and was able to pull back a goal on a man-up opportunity. Attackman Josh Stout notched his first goal of the game late in the first quarter off a restart when he pushed from X, got a step on his defender and wrapped around GLE, finding the top shelf. On the ensuing face-off, Utah face-off specialist Noah Hill was able to get the clamp and push the ball to midfielder Jake Stout on the wing. Stout carried into the box and initiated the offense. After working the ball around at the top of the box, midfielder Cam Redmond dodged, drew a slide then dished to Fjeldsted who found Jake Stout wide open in the middle of the field. Stout was able to find space and notch his second goal of the game, giving Utah a 5-2 lead at the end of the first quarter. 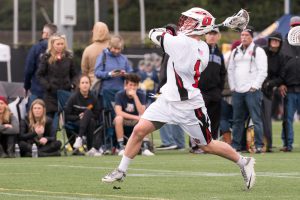 The Utes came out of the break on fire, reeling off six straight goals to take a 11-2 lead. The run was spread out and started with Jake Stout, Fjeldsted, midfielder CJ Anderson, Redmond, midfielder Ian Elson and ended with Jake Stout the same way he started it. The defense held strong during this time too, causing turnovers and not allowing the Huskies to find room to get off a clean shot. Washington pulled back a goal but it was quickly answered when face-off specialist Mikey Vetter won the ensuing face-off then found Fjeldsted who lost his defender and fired from 15 yards away, stinging the bottom corner for the goal. Attackman Alek Kirschner scored his first goal in a Utah uniform on a great individual effort to close out the half with Utah leading 13-3.

Washington scored two quick goals in the second half but Utah kept calm and was able to go on a three goal run. Long stick midfielder Seth Neeleman scored his first goal of the season on a nice give and go play with Josh Stout. Stout then added two goals of his own to make the score 16-5. After a Washington goal, CJ Anderson scored a worm-burner as time expired in the quarter to give the Utes a 17-6 lead after three quarters. Washington would score 4 goals in the fourth quarter with Josh Stout scoring the lone goal for Utah, making the final score 18-10.

Josh Stout led the scoring with 4 goals and 1 assist. Jake Stout had 4 goals. Neeleman and Vetter each had 5 groundballs. Vetter went 8 of 12 from the face-off X. Goalie Quinton Swinney had 10 saves.

The win extends Utah’s winning streak over the Huskies to 5. Utah (2-0) will head to Las Vegas on Monday to face UNLV.

Quotes
Head Coach Brian Holman on what he liked about the game:
“What I liked is the fact that we weren’t happy as a group with some of our play early. I liked the fact that that was upsetting us. We’re holding ourself to a higher standard and that’s a good sign.”

Head Coach Brian Holman on building and maintaining a lead:
“Those games are difficult. We’re up after the first and halftime, that’s not easy. You don’t play the score. You play every play and every groundball and I think we did a nice job of that. We continued to just push forward. You start playing the scoreboard and that leads to a little trouble. We just played until we couldn’t stop playing.”

Head Coach Brian Holman on getting time for everyone:
“Awesome, that may really be the happiest thing of all. It’s a team game and we didn’t play everyone at Chapman and this game we had the opportunity and it’s rewarding for those guys. Their just as much a part of the team as everyone else. Our goal is to play everybody. Some guys got some time that we can look to build off of and we’ve got three games in five days so everyone’s gotta play.”

Captain midfielder Gus Colonna on the overall game:
“From the beginning whistle we came out a little bit flat but after about 10 minutes in the first we really got our mojo back and coach sat us down and talked about our game plan and what we need to focus on. We listed to him and eventually came to and started working together as a team. A win is a win and we’re proud of it and we’re ready to move on to UNLV.”

LSM Seth Neeleman on getting his first goal:
“I’m just glad that Josh was able to look up and see me. It means a lot to get this team going and represent the defense and get a chance to be part of the offense.”

LSM Seth Neeleman on the overall game:
“We started out a little cold in the beginning but we got our act together and the defense came together and communicated well.”