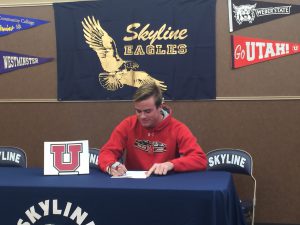 Ben Adams is a defensemen from Salt Lake City who attends Skyline High School. Adams originally committed to Penn but was intrigued by the direction the program is taking.

“It was really a combination of things,” said Adams. “The coaching staff is amazing and being able to be part of the first D-I program in Utah was very exciting. I also love the state of Utah and so I couldn’t pass up the opportunity to stay here and play lacrosse.”

Outside of lacrosse, Adams played football and volleyball and enjoys skiing, waterskiing, wake boarding and mountain biking. Adams comes from a family of 5 with his parents meeting in law school at the University of Utah. Adams has an older brother and a younger sister as well as 2 dogs, Cooper and Scout.

Adams is currently a Student Body Officer, member of the National Honor Society and is a National Merit Scholar Finalist.