The University of Utah Men’s Lacrosse team fell to the Arizona State Sun Devils on Friday, 14-11, in the Utes 2017 home opener.

Arizona State won the opening face-off an immediately settled into its style of game, holding the ball and taking time off the clock while working for the best opportunity. A dropped ball in front of the crease by ASU led to a ground ball by Seth Neeleman who cleared which led to a fruitless Utah possession. Both teams played tight in the first part of the first quarter which saw good opportunities but no goals. 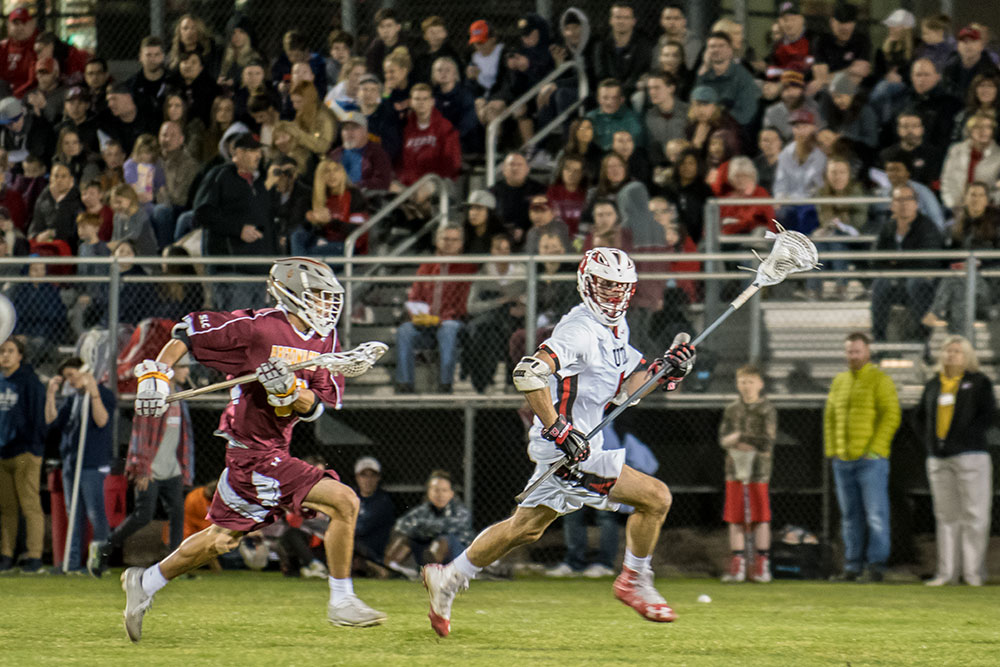 The No. 10 ranked Sun Devils scored first when Ryan Bradway found Rhett Rodgers on the crease. Rodgers wasted no time with a quick-stick shot that found the back of the net. The Utes leveled a minute later when midfielder Dallas Reed found Aaron Fjeldsted wide open on the wing. Fjeldsted stepped down and shot it through the goalies 5-hole to tie the game at 1. A save by Utah goalie Quinton Swinney setup the next Utah goal when he made a great save off a bounce shot. Midfielder Deen Anderson scooped up the loose ball and took it to midfield, got pushed out of bounds, drew a flag and shuffled the ball to the offensive zone where attackman Luke Graney ended up with the ball. Graney fed to Fjeldsted who slowed down the pace, drove from X and found Graney wide open on the crease. Graney faked high and shot low for the easy goal to give the Utes a 2-1 lead. ASU would tie the game at the 2:12 mark on the exact same feed from X to a guy on the crease play. This time it Bradway to Patrick Haviland. Haviland gave the Sun Devils the lead on the next possession with a wrap around goal while falling over. ASU would win the ensuing face-off to setup another possession where Jake Marthens found Rodgers on the crease for the goal. The first quarter would end with ASU up 4-2.

Freshman attackman Josh Stout would pull a goal back for the Utes at the 9:37 mark when he wrapped around from X and was able to get his hands free for the great goal. The Sun Devils would answer back with goals by Haviland and Tommy Carrasco, making the score 6-3 late in the second quarter. Cam Redmond scored the next goal for the Utes when Graney found him wide open on the crease. Redmond quickly turned and sneaked it into the goal to cut the Sun Devils lead to 2. Rodgers had a time and space step down to turn the lead into 3 for ASU. After a long Utah possession with several good looks, Fjeldsted found the back of the net to make the score 7-5 for ASU. The Sun Devils would sneak in a goal with 1 second left in the half, making the score 8-5 at the break in favor of Arizona State.

After a little bit of confusion on the field to begin the second half, Utah was able to capitalize off a quick restart when Stout found Fjeldsted who ripped it past the ASU goalie to cut the lead to 2 goals in the first 15 seconds of the second half. The Sun Devils would go on a three goal run to make the score 11-6 with 9:47 to play in the third quarter. Midfielder Gus Colonna would notch his first goal of the game while bringing the high heat to the top shelf at the 8:41 mark. Rodgers would get his fourth goal of the night at the 2:34 mark on a great crease feed to give the Sun Devils a 12-7 lead.

Utah would answer back at the 2:34 mark when Reed drove down the alley and ripped a huge top left corner shot. The pace of played increased which benefited the Utes, leading to a great goal by Colonna when he drove down the alley, drew the slide, spun and stepped down into a bounce shot to make the score 12-9.

The Sun Devils extended its lead at the 8:13 mark when Marthens found the back of the net. Graney would pull one back from the Utes on a great feed from Reed halfway through the fourth quarter. ASU would again answer with a goal by Rodgers on an individual effort from X. Despite good opportunities and great possession, the Utes weren’t able to come back from the deficit. Stout did notch a goal with 31 seconds left on a man-up opportunity when Graney found Stout cutting down the middle, making the score 14-11.

Utah was led by Fjeldsted who had 3 goals and 1 assist. Fellow captain and attackman, Graney had 2 goals and 2 assists. Swinney had 7 saves.

Utah will take to the road on Monday to face No. 5 Cal.

Quotes
Head Coach Brian Holman on the overall game:
“I thought they were better then us. They were good. They were quicker. We fought hard though and that’s a trait we are trying to develop here at Utah Lacrosse. We’re going to fit to the bitter end. We made a lot of errors that were unforced. Overall I thought they were our toughest opponent. I thought our effort was great but we were sloppy in some areas.”

Head Coach Brian Holman on how to build on a loss:
“Coaching is really how you respond to losing and what you learn from it. I told the team that I learned so much about us tonight, good and bad. It’s going to help me prepare them, it’s going to help the coaches prepare them. We’ll grow from it. It doesn’t mean we’ll win our next game, but we will get better from the things we saw tonight against a really quality opponent that will help us down the line.”