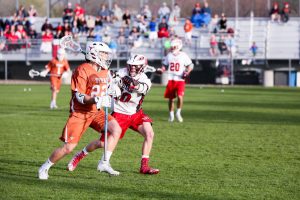 The University of Utah Men’s lacrosse team will take to the skies en route to Texas for a showdown against the University of Texas Longhorns on Thursday and the SMU Mustangs on Saturday. Utah (3-0) will enter the weekend hoping to ride the momentum from its first outing, a 3-0 weekend in Southern California over President’s Day Weekend.

“We look forward to getting back on the road and face two tough opponents, this trip will give us another wonderful opportunity to grow, learn, and hopefully get better,” said Utah Head Coach Brian Holman.

The Thursday tilt between the Utes and Longhorns (3-3) will be a rematch from the 2017 season where Texas beat Utah, 10-8, in Salt Lake City. Texas is coming off a 13-7 win over LSU last Friday.

On Saturday, Utah will head north to Dallas to face the Southern Methodist University Mustangs (4-3). The Mustangs won the 2017 Lone Star Alliance, which earned a spot in the MCLA National Championship, and are coming off a 14-7 loss to Oklahoma last Saturday. The game will be streamed by StickStar Lacrosse.

“This trip down to Texas is a huge hurtle to us as a team,” said Sophomore Captain Seth Neeleman. “Texas game into our house and give it to us last year so we’re looking to do the same. I’m excited to spend the next few days with the team and give it our all on the lacrosse field.”

Notes
– This will mark the first time the Utes have traveled to anywhere in the LSA. Last years contest with Texas was the first time Utah played an LSA team.
– Attackman Josh Stout currently leads the team in goals (11) and assists (5) and is averaging 5.33 points per game.
– FOS Michael Abizaid leads the team in groundballs (19) and has won 34 of 52 face-offs.
– Goalie Daniel Costa enters the weekend with a 0.722 save percentage.