The No.1 University of Utah Men’s lacrosse team captured its seventh win of the season on Thursday night by beating the No. 20 Oregon Ducks, 15-6.

The Utes (7-0) struck first when midfielder Cam Redmond was on the wing and found midfielder Reid Lanigan cutting in the middle of the field. Lanigan was able to beat his man off-ball and get space then bury the shot to give Utah a 1-0 lead. Oregon (3-3) answered 3 minutes later to tie the game but the Utes continued to win face-offs and push the ball. Attackman Josh Stout, midfielder Gus Colonna, attackman Joseph Olivas, and Lanigan found the back of the net for the Utes to make the score 5-1 after the first quarter. 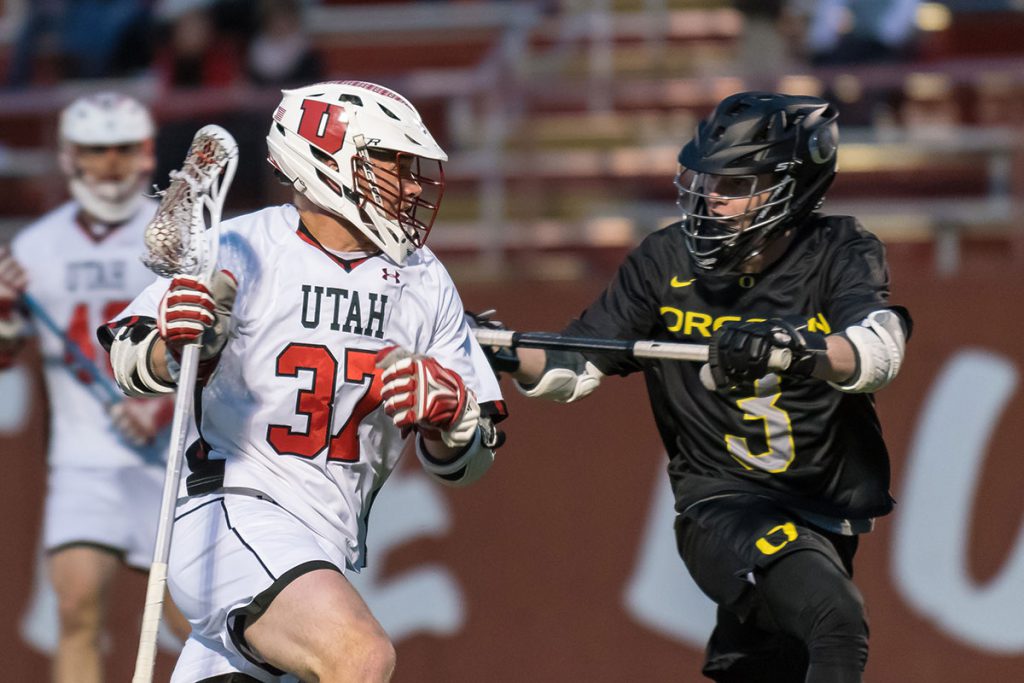 Ducks midfielder Nick Gilbert scored the first goal of the second quarter but the Utes once again answered, but it came after the Ute defense successfully killed a penalty where they were down three men. Utah goalie Daniel Costa made a huge save to keep the Ducks off the board. The Utes answered the Ducks with a 4 goal run. The run started with attackman Quinault Mackey made a heads up play when a shot was saved by Oregon goalie Sam Synder. Synder collected the loose ball and looked to outlet but Mackey held his stick up, knocked the ball into the air, collected it and backhanded it low-to-low for the goal. Stout scored next for the Utes then attackman Bo Powell scored back-to-back goals to make the score 9-2 at halftime.

What a save by Costa on the 6v3 man down for @UtahLacrosse. pic.twitter.com/nN4J8EnJQj

A quick third quarter led to Utah scoring two goals, one by Mackey and one by Lanigan. Oregon pulled a goal back at the 4:08 mark but Utah answered less than a minute later on a goal by Mackey. The Ducks started the fourth quarter with the ball off a Utah penalty and quickly scored two straight goals in 40 seconds, making the score 12-5 early in the fourth quarter. Both teams continued to play hard which led to a goal by Colonna at the 10:00 mark and a goal by Redmond at 8:35. Both teams would trade goals towards the end of the game, making the final score 15-6 for the Utes.

“I thought Oregon did a nice job, they are really athletic,” said Utah head coach Brian Holman. “I think they challenged us in some areas but I thought we responded well. We did some things that were uncharacteristic for us but that’s the point of playing games, to get better.”

Lanigan led the team with 3 goals and 2 assists. The face-off crew went 19-23 which was a key difference in the game. Costa finished with 11 saves before Zachary Johns stepped between the pipes and registered 2 saves.

The Utes will host Washington on Saturday in the second game of a doubleheader. At 1:00pm, No. 1 Juan Diego High School will take on No.2 Park City High School which will be followed by the Utes and Huskies at 4:00pm. Both games will be played at Judge Memorial High School in Salt Lake City. Be sure to follow all the action on social media (Twitter, Instagram, Facebook).