The University of Utah men’s lacrosse team battled Westminster on Friday at Judge Memorial High School in Salt Lake City in a mid-season scrimmage. The game was controlled by the Utes for the entirety which led to a 17-10 win.

Junior midfielder Aaron Fjeldsted scored the first goal of the game for the Utes on a left alley dodge where you bounced in a shot on the run. Sophomore attackman Josh Stout scored next for the Utes when a feed from Freshman attackman Quinault Mackey found Stout wide open in front of the goal. The Griffins answered with two goals to make the score 2-2 at the end of the first quarter.

Utah came out of the break with three straight goals. Freshman midfielder Jake Nutter, Fjeldsted and Senior midfielder Gus Colonna found the back of the net for the Utes. Westminster scored two more goals to make the score 5-4 with 5:05 remaining in the half, but the Utah offense went to work, scoring three more goals. Freshman attackman Cole Watson scored his first goal of the game after beating his man and finding space 10 yards out in front of the goal, shooting  low and finding twine. Watson scored again just 13 seconds later when Freshman FOS Collin Leigh won the face-off and Freshman LSM Chris Belcher scooped up the ground-ball. Belcher pushed up the right alley and drew a soft slide but Watson back-cut his man, caught the perfect pass from Belcher, and buried it in the back of the net. Colonna scored from 12 yards out on a step down with 5 seconds left in the half to give Utah an 8-4 lead. 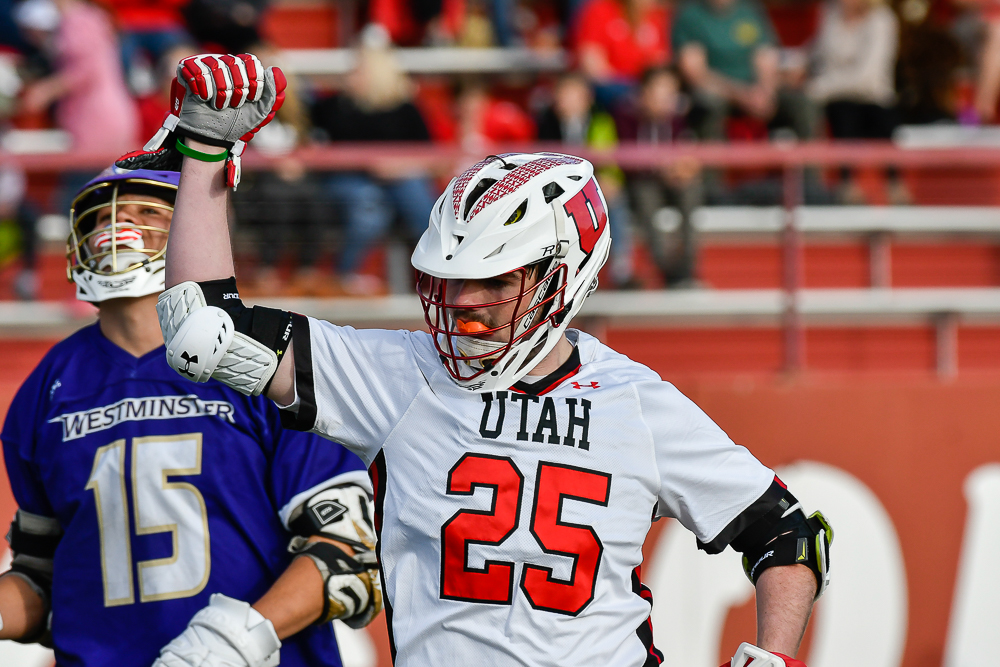 The third quarter was a true back-and-forth affair as Utah scored four goals while the Griffins scored three. Freshman midfielder Reid Lanigan, Freshman attackman Bo Powell, Colonna and Josh Stout all had goals for the Utes.

The fourth quarter saw Westminster score first to make the margin 4 goals for the Utes but Powell answered late in the quarter. The Griffins scored on a man-up opportunity but Utah answered with a man-up goal of its own just 34 seconds later. Junior midfielder Jake Stout pushed from X and found Josh Stout on the wing. Josh Stout stepped down and placed it in the bottom far pipe corner for the goal. Watson again scored back-to-back goals within 17 seconds to give Utah a 16-9 lead late in the game. Senior attackman Luke Graney scored the final goal for the Utes at the 1:07 mark. The Griffins would score one more goal, making the final score 17-10.

“The scrimmage did exactly what we hoped for,” said Utah head coach Brian Holman. “We got challenged on both sides of the ball and our guys responded really well. We’re more grateful for the film that we can learn from and this is a great propeller into league play.”

The Utes will host Utah State next Thursday at Ute Soccer Field. The game is scheduled to begin at 7:00pm MT.