The University of Utah Men’s lacrosse team beat the Texas Longhorns on Thursday by the score of 19-5 in Austin, Texas.

Attackman Josh Stout opened the scoring after midfielder Aaron Fjeldsted chased down a loose ball and then found midfielder Jonathan Rose open on the wing who then found Stout. Stout stepped down and rattled the back of the net. After a goal by the Longhorns, the ensuing face-off saw LSM Chris Belcher come away with the loose ball and push it up the field where he found Stout. Stout found fellow attackman JoJo Olivas who pushed from X and rolled inside, then scored on the crease. The Utes capitalized on a Texas penalty when Stout scored from the wing. Texas was able to find the back of the net to keep the game close but the Utes scored again late in the quarter when midfielder Jake Stout took charge and finished with a goal, making the score 4-2 after the first quarter. 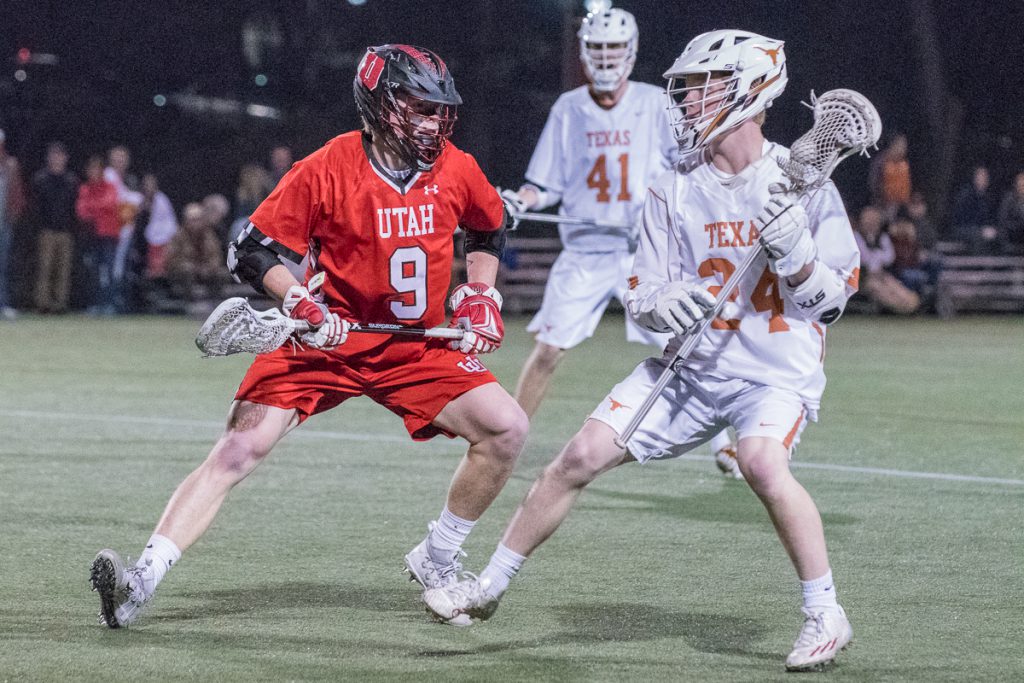 The Utes reeled off 4 unanswered goals in the second quarter behind a tough a ride and great defense. The run was led by Fjeldsted who scored on an outside rip. Defenseman Rylan Lemons scored his first goal in a Utes uniform when he was left unmarked in transition. The Stout brothers capped the run with a goal each.

The third quarter was more of the same with Utah scoring six goals and allowing just one. The scoring began with midfielder Reid Lanigan finding Quinault Mackey inside who quickly scored. Olivas was the benefactor on the tail end of quick passing around the Texas zone for the next Utes goal as he buried it from just above GLE. Mackey added another goal and Lanigan got his name in the goal column with the Utes twelfth goal. Josh Stout went back-to-back for his fourth and fifth goals of the game.

Texas scored late in the quarter and again to begin the fourth quarter, but the Utes offense continued to perform with goals by Fjeldsted, midfielder Steven Ganelin, two goals by attackman Bo Powell and the final goal by midfielder Ian Elson who scored from outside giving Utah a 19-5 victory.

“We did some really, really good things,” said Utah Head Coach Brian Holman. “But we also did some sloppy things. I think when we play with a lot of pace like we did, we’ll turn the ball over but some of it was mental as well. It was a great team win. We played hard and were relentless which is what we asked them to do.”

Once again the Utah defense rose to the challenge. Solid goalie play by all three goalies, Daniel Costa, Zachary Johns and Max Holmes helped the Utes keep the Longhorns off the scoreboard. The defensemen were true with their checks and sound in their schemes which helped to snuff the Longhorn attack.

The Utes will head to Dallas on Saturday for a showdown against the SMU Mustangs. The game will begin at Noon CT.