The No. 2 University of Utah men’s lacrosse team beat No. 5 BYU on Thursday by the score of 16-8, its first win over the Cougars in program history. The win also marks the first undefeated regular season for the Utes, who finished with a 13-0 record. The Utes also went undefeated in the Rocky Mountain Lacrosse Conference for the first time and will be the No. 1 seed heading into the RMLC playoffs next weekend.

Freshman attackman Cole Watson scored the first goal for the Utes when Freshman attackman Quinault Mackey found Watson wide open in front of the goal. Watson caught the ball and spun around the approaching defender, leaving him one-on-one with BYU goalie Dalon Hampshire. Watson placed the ball perfectly, scoring his 22 goal of the season. BYU answered 8 minutes later when Chris Severson found the back of the net. Utah wasted little time answering when Freshman Liam Cavanaugh-Fernandez picked up a groundball at midfield and ran past three BYU defenders creating a fast-break for the Utes. Cavanaugh-Fernandez dished to Stout who fed Mackey who did an inside roll and dove in front of the crease and scored. The Cougars answered but Senior midfielder Gus Colonna found the back of the net for Utah after dodging past two defenders, dropping the ball, then collecting it just in time to shoot it, making the score 3-2 for Utah after the first quarter. 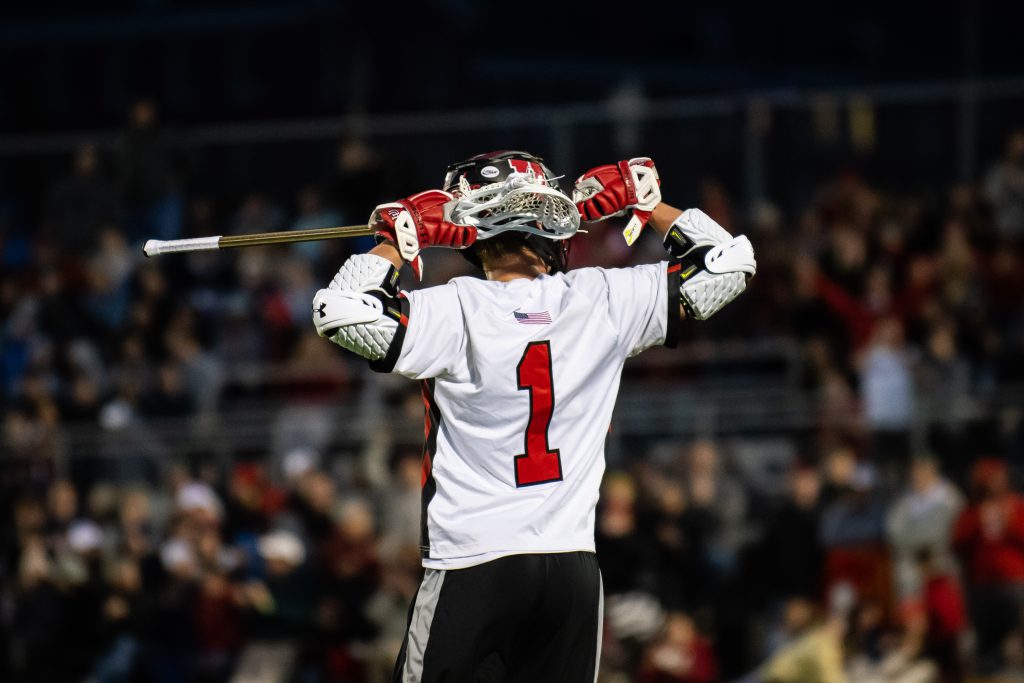 BYU tied the game at 3 at the 12:31 mark but the Utes answered with a seven goal run, making the score 10-3 for Utah at halftime. The run began with a Stout step-down laser that was perfectly placed. Freshman midfielder Reid Lanigan scored next when he lost his man behind the cage and Stout fed him the ball. Lanigan finished with ease on the crease. The Utes used a man-up opportunity for the next goal when Senior attackman Luke Graney found the back of the net. Junior midfielder Aaron Fjeldsted made it 7-3 on an outside shot that found the top of the net. Junior midfielder Jake Stout notched his first goal of the game on a wheel play that got the BYU defense moving, leaving Stout wide open from 5 yards out. Colonna scored next when he was able to get inside and score right on the crease. The next Utah goal was a true team effort as Sophomore defenseman Seth Neeleman jarred the ball loose, collected the groundball, pushed transition and found Jake Stout who waltzed through the BYU defense and scored.

The second half began with two Utah goals. The first goal started as Senior midfielder Cam Redmond picked up a saved shot by Utah goalie Daniel Costa and ran past everyone, leading the fast-break and found Watson who quickly dished to Mackey who backhanded it into the goal. Cavanaugh-Fernandez extended the lead to 9 goals for the Utes when he swam over his man, switched to his left hand and buried it in the top shelf. BYU would add two goals midway through the quarter to make the score 12-5. The Cougars continued to possess the ball and get great looks on goal, but the Utes defense held strong, not giving an inch.

BYU scored the first two goals of the fourth quarter, making the score 12-7 for Utah with 12:46 remaining. Utah answered with a two-goal run of its own which began with Jake Stout finding Josh Stout who scored from outside. Josh Stout added another goal for the Utes at the 5:38 mark when he drove past two BYU defenders and went one-on-one with Hampshire, faking high then scoring low. BYU added another but Josh Stout and Redmond answered for the Utes, securing the 16-8 victory.

“We’re very proud of our guys,” said Utah head coach Brian Holman. “I told the team though that this is who we are now. I’m not trying to down play the game, but we weren’t up-playing the game either. We have a ton of respect for BYU and a big key for us is if we can play with the big boys. I think tonight we proved that we can.”

Josh Stout finished with 4 goals and 4 assists. Jake Stout and Mackey had 2 goals and 1 assist while Watson and Fjeldsted had 1 goal and 2 assists. Costa had 12 saves in goal for the Utes. The face-off crew went 15 of 28 with Freshman Michael Abizaid winning 12 of 21 and Freshman Jacob Chang winning 3 of 7.

Utah awaits the result of the Colorado versus Colorado State matchup on Saturday. The No. 1 seeded Utes will take on the losing team on Friday, April 27 in the RMLC semifinals in Orem, Utah.