The No. 1 seeded University of Utah Men’s lacrosse team claimed the 2018 RMLC D-I Championship on Saturday in Orem, Utah, by beating the No. 3 seeded Colorado Buffaloes, 17-10.

Utah scored first when senior midfielder August ‘Gus’ Colonna worked through the Colorado zone and fired a left handed shot that found the back of the net. Senior midfielder Cam Redmond scored next for the Utes when he beat his man at the top of the box and went straight to the cage, shooting just over the shoulder of Colorado goalie Russell Riley. Colonna mimicked Redmond on the next Utah goal as he also beat his man up top and took to the cage for the goal. Sophomore midfielder Ian Elson initiated the next goal as he drew a slide off an alley dodge then dished to sophomore attackman Josh Stout who curled and scored, giving the Utes a 4-0 lead early in the game. 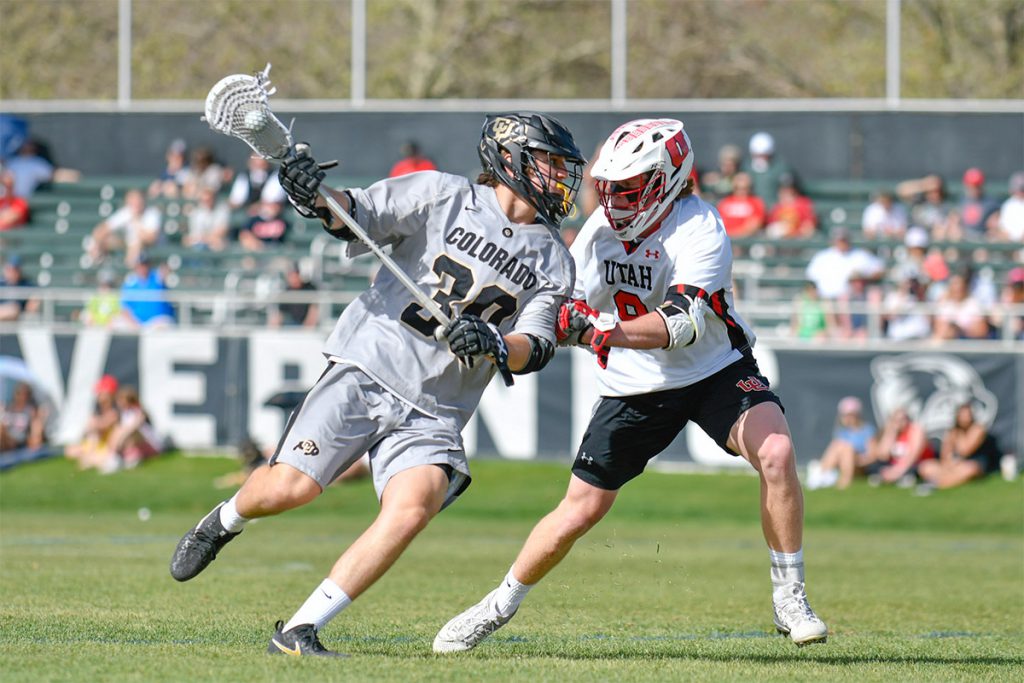 The Utes continued to play aggressive which led to sophomore defenseman Seth Neeleman scooping up a groundball at the top of the Colorado box then pushing transition, drawing the first defender, then feeding Stout who stepped down and nailed the top corner for the Utah goal. Freshman attackman Quinault Mackey bounced in a shot from the top of the box, then Elson stung the top shelf to make the score 7-0 for Utah. Colorado scored two quick goals late in the quarter but freshman midfielder Liam Cavanaugh-Fernandez pushed from goal-line extended and scored while getting pushed, giving Utah an 8-2 lead after the first quarter.

Colorado came out of the break and scored three straight goals, making the score 8-5 at the 12:28 mark in the second quarter. On the ensuing face-off, freshman FOS Collin Leigh won the clamp for the Utes then found freshman LSM Chris Belcher who took it to the rack uncovered and scored. Colorado scored again, making the score 9-6 at halftime.

Utah went on a five-goal run to begin the third quarter, extending the Utes lead to 8 for the Utes. Colonna, senior attackman Luke Graney, Elson, Josh Stout and freshman attackman Cole Watson scored for the Utes during the run. The Buffaloes were able find the back of the net twice late in the quarter, making the score 14-8 heading into the fourth quarter.

Colorado scored the first goal of the fourth quarter but the Utes teamwork in transition led to the next goal when junior goalie Daniel Costa made the save then fed to Belcher on the wing. Belcher found Neeleman who led the fast-break then found Stout who fed to Watson who scored. The next Utah goal came off a Colorado own-goal at the 8:59 mark, making the score 16-9 for Utah. Both teams traded goals with Colonna netting the Utah goal, making the final score 17-10, capturing the Utes first ever RMLC D-I Championship.

“It feels great,” said Utah head coach Brian Holman. “I’m just proud of the kids and the staff. This was one of our goals and we were adamant about getting it. Hopefully we made all the past Utah players proud as well. It’s a big step for our program.”

Fourteen Ute had at least one point with Josh Stout leading the way with 3 goals and 4 assists. Colonna finished with 3 goals including the first and last goals for the Utes. Freshman FOS Michael Abizaid and Leigh went a combined 18 of 30 from the face-off X. Costa finished with 9 saves.

With the win, the Utes earned the RMLC automatic qualifying bid to the MCLA National Tournament in May. The tournament selection committee will announce the bracket tomorrow no later then 10:00pm MT.