The University of Utah Men’s lacrosse team fell to the Boise State Broncos on Saturday, coming out on the losing end of a 11-10 showdown.

Utah (7-3, 1-0) grabbed an early lead when attackman Josh Stout scored the first two goals for the Utes. The first came on a signature wrap around from X and was followed by Stout cutting from GLE when midfielder Jake Stout faked a shot that got the defense to stand still. Jake Stout then dished to Josh Stout who was wide open and buried it into the back of the net. Boise State tied the game with a two-goal run of its own late in the quarter. Utah regained the lead with 50 seconds left when Jake Stout scooped up a loose ball near the midline, looked up and found attackman Aaron Fjeldsted wide open behind the defense. Fjeldsted pushed towards goal, drawing the lone defender then dumped the ball to attackman Alek Kirschner who bounced it in. 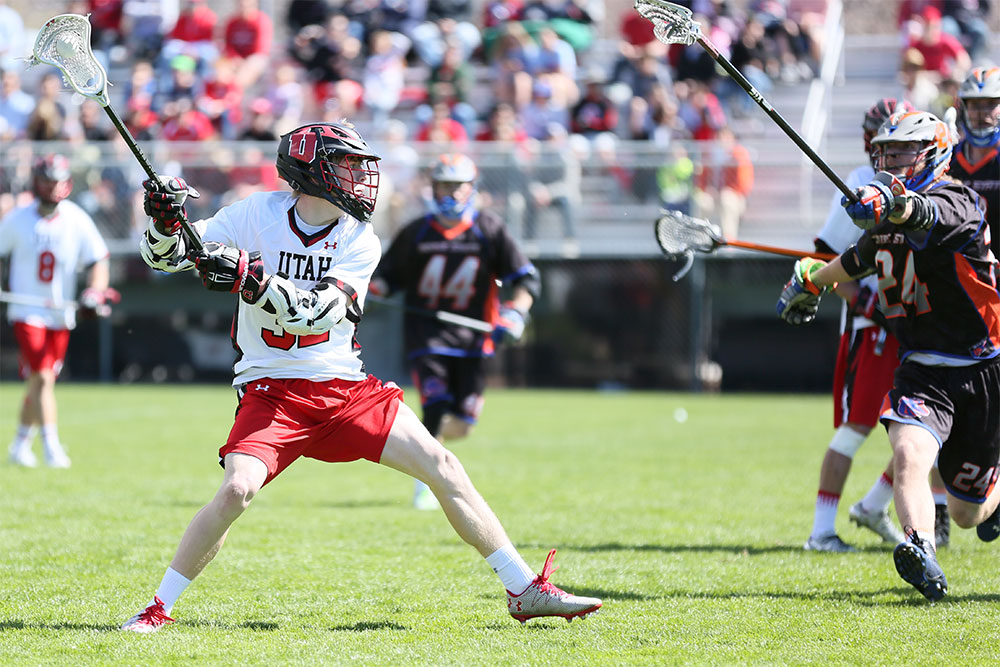 Jake Stout doubled the lead for the Utes at the 11:48 mark in the second quarter after a pick behind the goal resulted in him being wide open. Stout pushed the crease and shot a textbook shot high into the twine. The lead was short-lived as Boise State scored on its next possession to make the score 4-3 for Utah at the 10:35 mark. Josh Stout earned his hat-trick when he drove from behind the goal and wrapped around, shooting just outside the leg of the goalie but just inside the pipe. The Broncos were intent on not letting the game slip away and scored on its next possession. The back-and-forth game continued as Utah midfielder Cam Redmond bounced in an outside shot to give the Utes a 6-4 lead. The Broncos reeled off two straight goals late in the quarter to make the score tied at 6 with 2:25 left in the first half. Boise State earned its first lead of the game on the next possession with an outside rip by Kolten Rosin. Rosin would another goal shortly after to give the Broncos a 8-6 lead heading into the half.

Utah came out of the break on fire, scoring four straight goals. Jake Stout started the run when Gus Colonna faked a shot and passed the ball to Stout who was wide open on the wing. Josh Stout had the second goal of the run on his signature wrap around from X. Colonna was able to dodge from the top of the box and get space in the middle of the field, shooting a low burner into the bottom corner for the third goal. The run ended with midfielder Ian Elson using his size to muscle past his defender, getting a shot off while being guarded that found the back of the net. The Ute defense held the Broncos scoreless in the quarter after several saves by goalie Quinton Swinney and great sliding and stick checks.

Utah liked its chances heading into the final frame, but fortune was not on the Utes side. Boise State would mimic the Utes third quarter defensive effort by holding Utah scoreless while scoring three goals of its own, making the score 11-10 late in the game. With 37 seconds left in the game, Utah called a timeout to regroup and setup a play. After working the ball around, Josh Stout was able to find space and step down into a rocket that hit the crossbar and bounced to Jake Stout who shot on cage but was saved. Boise State collected the loose ball and heaved it the length of the field as time expired.

Utah was led by Josh Stout who had 4 goals. Swinney finished with 7 saves.

The Utes will continue RMLC play on Thursday when No. 5 Colorado comes to town. The game will begin at 7pm MT at Ute Soccer Field.

Quotes
Utah Head Coach Brian Holman on the difference in the game:
“They outplayed us and out-hustled us. When one team wants to play harder then the other they usually win.”